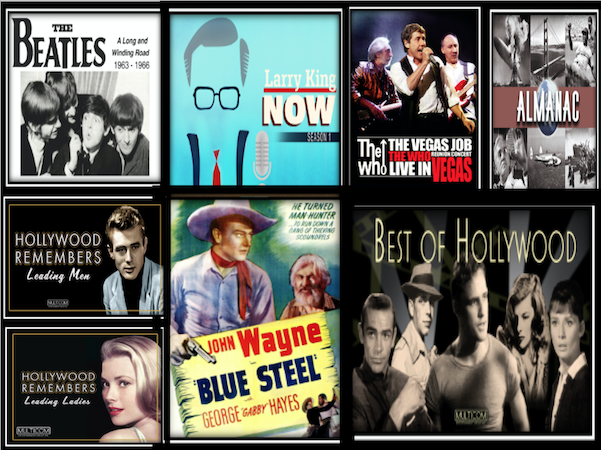 alee+ serves Generation Prime™ (50+) viewers through relevant lifestyle series and nostalgic programming. Think of the new streaming television network as both entertainment and personal navigation for your Rewirement Years. The channel is available on platforms like DistroTV and ZingoTV. Here are a few programming highlights for the month of July.

Historic events and influential individuals critical to America's development are documented in this series.  The events are presented chronologically through the calendar year and range anywhere from the 1700s to 1900s.  Everything is covered, from conflicts overseas, technological and infrastructural achievements, sports, natural disasters, to the beginnings of establishments and organizations. Look for each day on our Facebook page as well as within our streaming television lineup.

The Beatles: A Long and Winding Road

They shook the world. They changed the course of history. They are much more than just a rock group; they are a part of our lives. This documentary retells the incredible story of the world's enduring love affair with four lads from Liverpool who became the soundtrack for a generation.

The Rolling Stones: Just for the Record – 5 part series

Just For the Record chronicles 40 years of music by English rock 'n' roll legend, The Rolling Stones.  This comprehensive documentary features interviews from other musicians, producers, and fans.

The Who: The Vegas Job

On October 29th, 1999, The Who gave an one-night only concert in Las Vegas. Roger Daltry, Pete Townshend, John Entwistle, Zak Starkey and John “Rabbit” Bundrick, performed 14 of their greatest hits.

Passport brings the life of Jimi Hendrix to light as never before. From his upbringing in Seattle to his final days in London, JIMI HENDRIX: THE UNCUT STORY explores the complete life-story behind the legendary artist. From his early days in Seattle, Washington. To his early career traveling the Chitlin' Circuit playing behind some of the greatest names in R&B. Finally looking at his rise to stardom, and eventual death. Through exclusive interviews, we get the facts behind Jimi's demise and examine the events surrounding his controversial death. But more than that - we come to know the spiritual message behind Jimi's work and celebrate the final stage of his life in music.

A robbery draws the suspicion of Sheriff Jake, and he makes undercover federal marshal John Carruthers his primary suspect. While on Carruthers's trail, the two uncover a plot to rob the town blind.

John Mason is left wounded after his father's murder and is hellbent on avenging it. A tense love triangle develops between him, his beautiful nurse, and his best friend.

John Travers, a U.S. Marshall, arrives in a small town that has been plagued for years by a ruthless gang of bandits, led by a mysterious figure known only as The Shadow.

Initially looking for a missing girl, Rod Drew finds himself in the midst of searching for a gold mine too. The opposition to Rod is relentless in their pursuit of the gold mine.

Winds of the Wasteland

John Blair finds himself out of work when he discovers that there is a government mail contract being given to a local stage line owner. It is up to John Blair to win a race to achieve this contract.

An in-depth look at iconic celebrity relationships across Hollywood history. Interviews and archival footage give an insider's glimpse into the ups and downs, happily ever afters and tragic endings of famous couples.

Moviegoers have always been enamored by the Leading Ladies of Hollywood! Now in this single collection you can see the stories of some of Hollywood's biggest actresses & the movies that made them icons! From Audrey Hepburn to Marilyn Monroe & everyone in between, this series will make you want to shout, "Hooray for Hollywood"!

Moviegoers have always been enamored by the Leading Men of Hollywood! Now in this single collection you can see the stories of some of Hollywood's biggest actors & the movies that made them icons! From James Stewart to Cary Grant & everyone in between, this series will make you want to shout, "Hooray for Hollywood"!

Larry King brings you newsmakers of every stripe -- not just world leaders and celebrities from entertainment, pop culture and sports, but also regular people changing the world or caught in the crossfire of the most exciting and the biggest stories of the day.

A long-running, award-winning celebrity-based interview and music program. With over 300 episodes, alee+ will go up-close and personal with today’s and yesterday’s biggest stars.