Book Clubs, The Inside Story 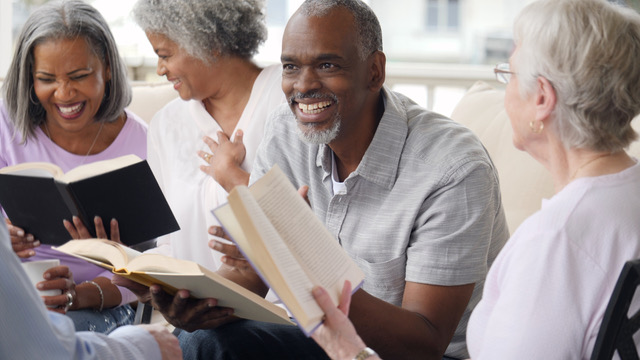 Years ago when I was home with two babies and was desperate to talk about something besides diapers and doodies, I started a monthly book club with neighbors, which became a life-saver, keeping my mind from turning to mush and helping me make new friends. Recently, when I moved to a new city, I was delighted to be asked to join an ongoing book group. Again, to stimulate my mind and to make new friends.

I am hardly unique: many groups were started for the same reasons — to have interesting conversations and to make new friends. Many groups are all-female, but there are also coed and all-male groups. Most meet monthly for about two hours and rarely exceed fifteen members. (Of course, not every member comes every time.) Some meet in restaurants; those that meet in homes usually serve simple food, since elaborate preparation is typically not a good dynamic — it tends to distract from the discussion and to set up a competitive mode.

These days during the pandemic, my group, like many, meets over Zoom. Each group functions in its own way, in terms of choosing and presenting books, handling discussions and everything else.

Donald Parker’s group in suburban Long Island started about 30 years ago when a few couples at a dinner party suggested, “Why don’t we get together to talk about something besides our children?” The group alternates between fiction and nonfiction, and at every meeting people suggest and briefly describe possible books, which are then voted on at the next meeting. “We never choose a book on the current bestseller list to avoid problems with availability,” Don told me, “and we check to be sure the local library has enough copies for everyone. Finally, the book has to be ‘discussable.’ Some books are a good read, but don’t lend themselves to a lively discussion.”

In my group, one member liked Alice McDermott’s Someone: A Novel, but thought it was not discussable. Then another member, an author herself, said, “If the book made such an impression on you, we should discuss how the writer managed to pull that off.” So the book made the cut – and there was a good discussion.

The ten members of Betty Mosedale’s group, run by The Transition Network (a nationwide organization for women over 50), take turns choosing books, drawing lots early in the year to see who will be responsible for each month's selection.  Each person presents three book options — all under 500 pages and in paperback or available as e-books — and members vote.

Betty had been in a group sponsored by her alma mater, Swarthmore College, which included men and women ranging widely in age. A professor led the group and selected the theme. One year the group read books written by authors from different cultures.

If you go to hundreds of groups, they specialize in crime, history, current fiction, pop culture, fantasy, memoirs, prize winners, graphic novels, books by specific authors like Vonnegut and Balzac and classics. Members of one group have been reading Proust for twenty years and still find new things to talk about.

Attorney Richard Haimowitz is a member of Scantectives, which reads Scandinavian mysteries and (before the current lockdown) had been getting together monthly over dinner at a restaurant. He doesn’t expect to run out of books since, as he told me, “In Scandinavia there are more detective stories per capita than there are murders.”

Typically, the member who recommends a book briefly presents information on the book and author and moderates the discussion. This job usually rotates but some groups have a designated facilitator. And some are unmoderated and anarchic, led by the most opinionated and overbearing member. “In the beginning I hated being in my group,” one woman told me. “The conversations went off on tangents and we spent little time talking about the book. But I liked the other women, so I stayed. I still wish we had a moderator to keep people on track and I suggested this once, but nothing has changed.” A moderator can also help to make sure that everyone gets a chance to speak. Two members of a Barnard alumnae book club told me independently that what they like best about their group is that “we stay focused on the book.”

What keeps members coming back?  “I feel a strong sense of loyalty,” Betty told me. “We have all made a commitment to come to each meeting and to read every book. I also like reading new books and the discussions are really involving. Plus – I like the other women. We are similar in age and have much in common, and so this group has taken on more of a social aspect than I had with my Swarthmore group, as stimulating as that one was.”

Members often form strong bonds even though they may vehemently disagree about the books. One reader told me, “I love the group, and this is a new thing for me – I’m not a groupie. But I like being with interesting, smart women from different backgrounds – and it’s fun getting to know them.”

Carol Karasick, a voracious reader who never had any interest in joining a book group until a friend invited her, sometimes enjoys the discussions about a book more than the book itself. And Bilha Goodman found that her group challenges her to read differently. “When I first joined a year and a half ago, I was the first to raise my hand. But when I listened to other people, I realized how much more there was to the book than I had noticed. Now I listen closely to what people say.”

‍In New York City, where there are more writers than trees, you can often entice an author to speak for free or a nominal fee. Barnard College has been deemed a literary hatchery by Joe Berger of The New York Times, graduating over the years Erica Jong, Mary Gordon, Ntozake Shange, Tama Janowitz, and Pulitzer winner Jhumpa Lahiri, among many other notable authors.

My group recently invited our member Vivian Gornick to speak about her memoir, Fierce Attachments. One member said, “It was really great to meet the author in a small setting and learn what makes her tick: how she writes, what she writes, and what she’s writing next.”

What happens when a member doesn’t like the book? The person suggesting one book referred to it as a ‘page-turner,’” Don told me with a laugh. “Well, I certainly turned the pages fast – but that was because I hated the book and wanted to get through it as fast as possible.”

Some readers adopt the “Rule of 50” devised by California librarian Nancy Pearl, author of Book Lust, which states "If you still don't like a book after slogging through the first 50 pages, set it aside. If you're more than 50 years old, subtract your age from 100 and only grant it that many pages."

And sometimes a book that you don’t like can lead to an engaging discussion, which was the case for me with Howard Jacobson’s novel The Finkler Question. It was the first book I read with my new group, so I forced myself to finish it. I ended up glad that I did because of the lively discussion spurred by it about anti-semitism. I was intrigued enough to go soon thereafter to the New York Public Library to hear Jacobson talk.

How to Find a Book Group